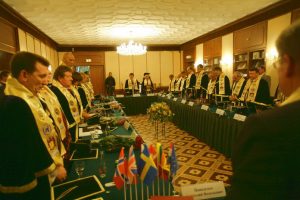 Now structure IHAC included many universities both others educational and scientific institutes of the world, including universities of the USA, the Great Britain, China, India, etc. IHAC has the right to offer various scientifically-educational program (in view of their practical value and real cost) to the persons-customers interested in such Programs (universities, scientific institutes, etc.) and, in case of their acceptance and approval to coordinate really performance and the subsequent application of Programs, and also to appropriate the International scientific degrees and ranks that who really deserves them (irrespective of the country of residing and a place of activity).

All the Programs which have acted in IHAC at IUFS during with 1/20/2009 in 2/20/2009, should pass the competitive analysis and selection for the further material (financial) support and realization. Expenses, material and spiritual, should be effective by the results.

Programs should have also not speculative and recommendatory character, and to continue and develop the real positive results already reached by authors of offered Programs and allowing on the level to make these results essentially added and advanced, real property of a world science and scientifically-significant world practice.

WSC considers it necessary to note corresponding awards of organizers and the most active participants WSC.